The first three graduate programs are established leading to the master's degree in Educational Technology, Communication and Information Systems Management.

A unique learning initiative begins by serving NGOs or communities through the Community Engagement Center.

Inauguration of the Institute of Musical Arts and the Center for Collaborative Innovation - Neeuko.

It was 1880 when three sisters of the Sociedad del Sagrado Corazón de Jesús (Society of the Sacred Heart of Jesus), got off a boat in San Juan harbor. They were coming from Havana, Cuba, and their mission was to continue the educational and spiritual deed in Puerto Rico begun by Mother Madeleine Sophie Barat just 80 years before in France.

During its first couple of years, the Colegio del Sagrado Corazón, also known as el Pensionado (the boarding school), was an elementary school dedicated to the education of girls. It was initially located at the Diputaciónbuilding in Old San Juan, but in 1882, the first building was erected on the grounds of the present-day Conservatory of Music of Puerto Rico. During the first years of the XX century, the School was located at Cruz Street in Old San Juan, until the sisters decided to purchase about 117 cuerdasof land in the Santurce area. Construction of the now emblematic building of Sagrado Corazón University began in 1906 at the highest point on those lands.

By 1935, the sisters wanted to expand their academic offer and founded the Colegio Universitario del Sagrado Corazón (CUSC), also known as “El College.” This institution provided a liberal arts education through programs such as Letters, Natural Sciences, and Secretarial Sciences. The first college class graduated in 1939, when eleven women received their Bachelor of Arts degree.

In 1972, the college opened its doors to the Puerto Rican community and began admitting both men and women. In December of 1976, the Board of Trustees officially authorized the use of the college’s new name: Universidad del Sagrado Corazón. 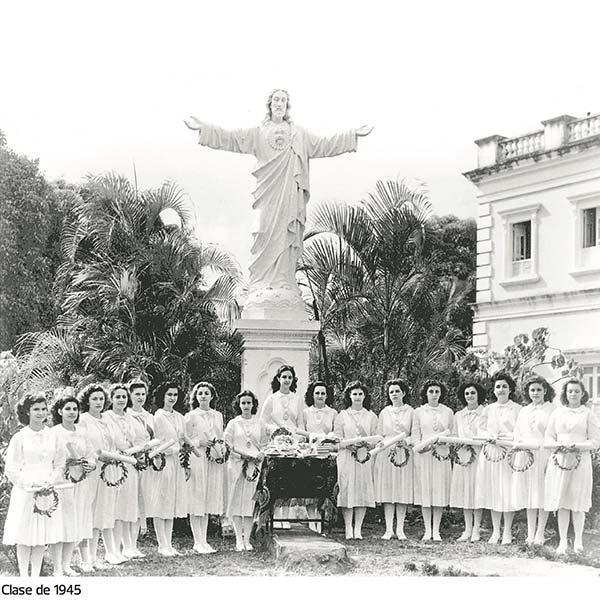 Since then, Sagrado has positioned itself as one of the most prestigious private nonprofit universities in Puerto Rico, resting on the pillars of a transformational mission: “To educate people in intellectual freedom and moral conscience, so they may be willing to build a Puerto Rican society that is more authentically Christian: a community for solidarity in justice and peace.” Likewise, the institution derives its academic mission from its vision to “offer a unique academic project, an innovative educational experience where the world is the classroom, in an environment known for its excellent community life and supported on the principle that human beings and Christian values are the very core of that project.”

With this mission and vision, Sagrado Corazón University seeks to position itself as an entity that makes an essential contribution to our Island’s future through the formation of highly-educated citizens with the highest ethical and Christian values.